I'LL TELL YOU MINE IF YOU TELL ME YOURS!

We are often asked, "What ABEC rating are the best for  scooter, skateboard or roller skate wheel bearings? and why don't Bones or REDS have an ABEC rating?" The answer is that "Bones & REDS bearings are Skate Rated™ meaning that they are specifically designed for skating and therefore are not ABEC rated."  But if you were to ask the average rider or skater what ABEC means, the chances are you’ll get an awkward silence. 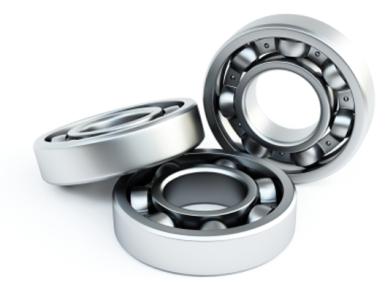 Similarly, contrary to popular belief, the ABEC rating does not affect speed! This is a common misconception made by many people. The ABEC rating is a function of manufacturing tolerances, the ABEC rating increases as the manufacturing tolerances (sizes & dimensions) become more and more precise. This is the main reason for the price increase, the higher the rating, the higher the cost to produce the bearing.   In the case of wheel bearings, these ratings do not necessarily affect speed. If speed is your primary concern however, then our advice is that you should go for well lubricated bearings, or not as the case may be dependent on your skating or riding style. 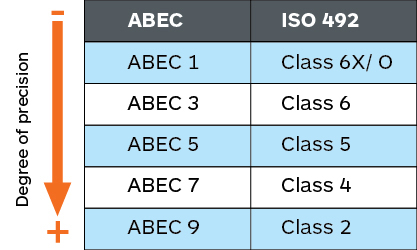 WHERE DID ABEC COME FROM?

The ABEC rating system has been around for the last 35 years. The purpose of the ABEC group (Annular Bearing Engineers Committee) is not to test every manufacturer’s bearings and proclaim them good or bad, but to establish dimensions, tolerances, geometry, and noise standards for bearings in an attempt to aid industrial bearing manufacturers and users in the production, comparison and selection of bearings for general applications. However, since every bearing is used in a different manner and environment, bearings should be redesigned or "customized" for special uses (like skating or scootering). The ABEC rating system is not intended to be the only criteria used for selecting bearings for use in specialized applications like skating. It is only one of the tools a bearing designer can use if it is appropriate for the application.

A QUESTION OF SPEED!

The ABEC rating system includes grades 1,3,5,7, and 9. The higher the ABEC rating, the tighter the tolerances are, making the bearing a more precision part. High precision and small tolerances are required for bearings to function at very high RPM, in products like high speed routers that must spin at 20 to 30,000 RPM. In an application like this, an ABEC - 7 or 9 bearing rating may be appropriate. However, a skateboard with 54mm wheels turning 20,000 RPM will be traveling about 127 MPH! Since virtually all skating is done under 30 MPH, the realistic maximum RPM your skate and scooter bearings will see is about 4700 RPM and probably 90% of skating and scootering occurs under 2000 RPM. Thus, very high precision is not required at skating speeds.


The dimensions and tolerances controlled by the ABEC standards include the diameters and widths of the raceways (internal & external rings), their shapes to some extent and the smoothness of the running surfaces. The ABEC rating system ignores side loading, impact resistance, materials selection and grade, appropriateness of lubrication, ball retainer type, grade of ball, the clearance between the balls and the races, installation requirements, and the need for maintenance and cleaning.  All these bearing design requirements are very important to the performance of your skate bearing, even though the ABEC rating says nothing about them.

SO HOW TO CHOOSE THE BEST BEARINGS?

There can be a HUGE difference between the performance of two bearings that both have the same ABEC rating. Indeed, we have found that in many cases, bearings with high ABEC ratings don’t perform as well as others with lower ABEC ratings in a skate or scooter wheel for example. Thus, reliance on ABEC ratings alone can lead riders to choose a bad bearing over a good bearing for rolling based on pure & simple hearsay.


To explain this another way, choosing an ABEC 7 or 9 bearing for skating would be like choosing an Formula One car to race in an off-road challenge, the logic would have you believe, but just because Formula One cars can go fast and are of high precision doesn't mean that it would win in an off-road competition. It's not that the F1 isn't a good piece of equipment, it's just that it is not designed for off road use and so it would quickly fail when its suspension breaks and its engine clogs with dirt.  For example, skateboarding exerts tremendous axial loads on bearings when skaters slide sideways or boards land on their rails, flexing the wheels over the bearings. Bearing components can deform or be damaged by heavy or repeated axial loads, particularly if they are manufactured to a high tolerance and therefore these must be considered for any use, a use that ABEC ratings do not account for.


With this in mind, during the early 1980s, engineers began to realize that skaters did traditionally unconventional things to bearings. George Powell amongst others, who having a background in engineering, began to experiment with various bearing designs for skateboarding. The Powell Swiss bearings were the first bearings designed specifically for skateboards. Powell recognized that bearings used in skateboarding should be designed with axial loads in mind, and that unlike bearings made for electric motors, skateboard bearings don’t have to spin quite as fast. Machine bearings are typically packed with thick grease, which ensures a long life but is sluggish at low temperatures. For his skateboard bearing, Powell began using a lighter lubricant that was less resistant and retained far less dirt than heavier greases, and synthetic ball retainers instead of metal retainers that are more easily damaged from axial loads. The same is true for roller skaters and most skaters can attest to the fact that skating with dirty bearings can be a bit dodgy.  All this is not to say that there is no discernible difference in rating numbers for skaters and riders, on the contrary, there will be a marked difference in 'smoothness' due to the tightness of tolerances as mentioned, but where durability and speed are concerned this is down to skating style, materials and their applicable environment, coupled with how well your bearings are maintenaned.


Today most bearings marketed for skating use light oil lubricants, and many feature synthetic retainers. Some companies have offered other alternatives to the standard 608 bearing, but in honesty, the tried-and-true 608 has proven itself through nearly three decades of skating’s evolution. Despite some confusion over ABEC ratings, chances are we’ll be rolling on 608s for years to come.


This is why it's so important to speak with your dealer and explain and discuss the type of skating you'll be doing, only then can the  correct bearing type be chosen.