What Is Roller Derby

What Is Roller Derby?

Roller derby is a full-contact sport played on quad roller skates, by players skating around an elliptical track. The game consists of a series of two-minute countdown jams.

At the start of each jam, each team sends five players onto the track: one Jammer (point scorer), three blockers(defensive/offensive players) and one Pivot (a special kind of blocker). The players are identified by their helmet covers – a stripe for the pivots and two stars for the Jammers. The pivots and blockers form a pack at the start line and the two Jammers line up on or behind the Jammer line. The Jammers’ aim is to make it through the pack of skaters and skate a full lap to enter the pack again. Once they re-enter the pack, they score a point for each opposing skater they pass legally.

Now for the fun bit: the skaters in the pack are doing their utmost to stop the opposing Jammer passing them and scoring points, while at the same time trying to help their own Jammer to pass opposing players. They do this by landing heavy shoulder or hip checks on opposing players, shoving them out of the way or knocking them to the ground. Skaters may use specifics parts of their body to engage opponents, and skaters may only target their engagements to specific parts of their opponents’ bodies. Illegal hits result in time served in the penalty box, legal hits often result in skaters flying off the track and landing in the crowd!

The game is fast and furious and full of adrenaline – once you see it you’ll be hooked. 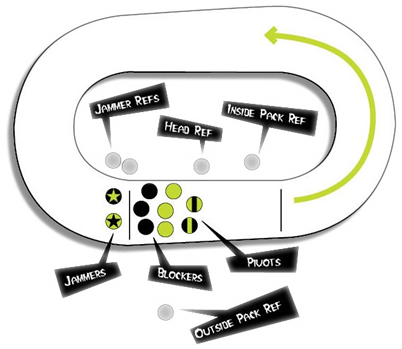 BASICS OF THE GAME

The sport of Roller Derby consists of two teams of four defensive players and one jammer – the point scorer. The game begins with the pivots and the blockers (defensive players) skating in front in a tight formation (the pack).

The jammers race to pass through the pack once, at which time no points are scored – but a “lead jammer” position can be established. They continue to race around the track a second time and attempt to pass the pack again. The jammers score one point for each opponent they lap as long as they pass that player in bounds and without penalties.

The jammers may continue to race and score points for two minutes or until the lead jammer “calls off the jam” (by putting her hands on her hips). Generally, a jammer scores four points each time she makes it through the pack within bounds and five points if she laps the other jammer! Like any sport, Roller Derby has many fine print detailed rules, penalties and strategies! And obviously, the team with the most points at the end of the game wins!

A jammer can be put into the penalty box which creates a scoring opportunity for the opposing team. If both jammers end up in the penalty box, the first jammer in the box is allowed back on to the track as soon as the second jammer reaches the box.

HOW BEST TO LEARN ROLLER DERBY?

This is the real deal. None of the action you’ll see is scripted or pre-planned; this is a real sport, and we play for keeps.

The best way to learn about roller derby is to watch roller derby.  Go to a bout or two, and you’ll get it. There are fans galore that are willing to explain the rules, talk strategy, and otherwise bask in the glow that is our sport.  Or... you can simply check out the history of roller derby at Wikipedia.org!

Each game of derby, called a “bout,” is played between two teams, each with five players in a lineup at one time on the track. Each lineup is made up of one pivot, three blockers, and a jammer. The pivot is recognized by her striped helmet cover, the jammer wears a helmet cover emblazoned with a star on each side, and the blockers have no helmet covers at all (but their helmets often have a plethora of stickers). Each game is 60 minutes, made of two 30-minute periods that are further broken down into two minute jams.

The pack is made up of pivots and blockers. At the start of the jam, the pack lines up along the straightaway of the track – pivots and blockers in the front, with jammers positioned 20 feet behind. A referee or time keeper will signal the start of the jam with a single whistle and the pack will start skating, with the jammers trying to sprint through the pack. This is the jam.

Each jam is a two-minute race to see which jammer can score the most points. The jammer earns a point for every member of the opposing team she passes. That may sound easy, but the opposing team is doing all they can to get their own jammer through the pack while stopping the other team’s jammer cold. Derby is a full-contact sport and skaters will use all legal means at their disposal to get the job done, including hitting the opposing team with their shoulders and hips, pushing and pulling on members of their own team, and doing a cool slingshot-like maneuver called a whip to speed their jammer through the pack.

Through it all, the blockers are doing their thing – blocking. Blockers can hit members of the opposing team with their shoulders, hips, and torso. It’s illegal to use the forearms, hands, and head, and the use of elbows is strictly regulated. Skaters who block illegally, start fights, or otherwise break the rules face penalties which can include everything from time in the penalty box to a complete expulsion from the bout.

Oh so much more:

There are a whole slew of rules that govern game play and regulate which moves are allowable; most leagues play by the official Women’s Flat Track Derby Association rules.

What is flat track roller derby?

Flat track roller derby is a fast-paced contact team sport that requires speed, strategy, and athleticism. The flat track version of the sport evolved in 2001, and has quickly grown to encompass more than 400 leagues worldwide. This is in large part due to the ease of setting up a flat track--it can be done on any flat surface that is suitable for skating, such as skating rinks, basketball courts, parking lots, and even airplane hangars. This greatly reduces the capital needed to start up a roller derby league, and allows small groups of people to get a fledgling league off the ground. The DIY spirit that drives the sport allows roller derby leagues to create their own unique identities and adapt their structures to reflect their local communities.

A bit of History

Originally invented in the 1930s, in 2001 a grass-roots Roller Derby revival started in Austin, Texas and over recent years this DIY movement has spread across the world as a not-for profit sport.

By 2004 the game had become so popular that a regulatory body was set up – the Women’s Flat Track Derby Association (or WFTDA). The WFTDA set the official rules for the game and also the minimum roller skating skills each skater has to have in order to play the sport as part of a competing team.

With a steady and gradual start, the UK has seen the sport explode in recent years making it one of the most exciting and upcoming extreme sports to be involved in. From one solitary league in 2006, to over 100 bouting and start-up leagues in 2012, the growth and recognition of the sport is showing no signs of slowing down.

This has been reflected not just in the UK, but across the globe and in December 2011 the first Roller Derby World Cup took place in Toronto, Canada. Thirteen teams from around the world competed over four intensive days – the England team eventually came home with an admirable third place!

Some actually say Roller derby can also be used as an adjective to describe a tough girl, or an activity that is aggressive and rough - what say you?


Women who play roller derby are often called derby girls or rollergirls (petty sure there's others).

What not to do!

Any of these will earn you a trip to the Penalty Box!

This is just a collection of information we've managed to piece together to provide an overview of what this wonderful art is about.  Have a view, share your thoughts with us below.